Volunteer Spotlight: A Marriage Built on Faith, Service and Love 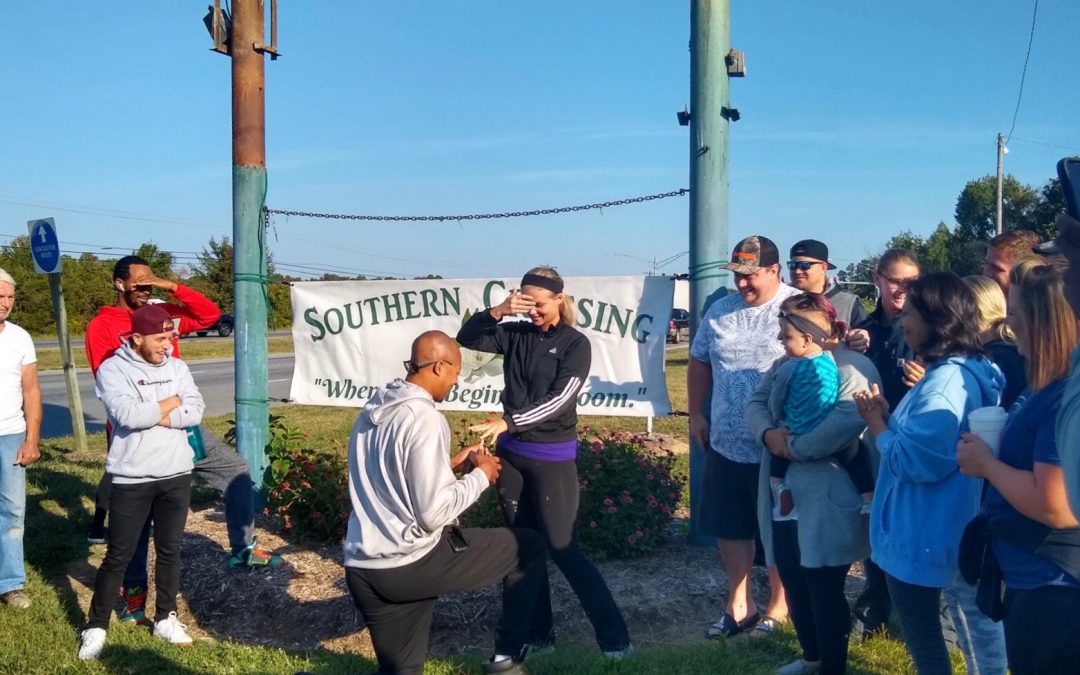 Before the day’s volunteer work began, the group gathered for a prayer.

A short safety rundown came next, and then Anthony Anderson stepped up to speak.

He had something to say to all. More importantly, he had a question to ask of one.

Anthony knelt down in front of Emily Watts and asked her to marry him. Over her shoulder, a white vinyl sign strung between two poles read, “Southern Crossing: Where Life Begins to Bloom.”

“I had no makeup, I didn’t brush my hair, and my pants had bleach spots,” said Emily, who thought the morning was to be little more than their latest day of volunteering at LifeStyles’ new transitional housing campus. “I was a little overwhelmed. And it was honestly the perfect moment.”

Theirs is a relationship built on faith, service and love. Emily and Anthony met through the young adults ministry at New Life Wesleyan Church in La Plata. Members of the group participate in a variety of service-related outreach efforts throughout the area.

One activity that became a regular event was helping demo and renovate the old White House Motel on US-301, where LifeStyles will provide up to 18 months of transitional housing, as well as life and career skills training, for those genuinely striving to leave homelessness behind.

The New Life group — sometimes six or eight people, sometimes just Emily and Anthony — showed up every Saturday morning for months to volunteer. As the work progressed, their friendship grew. Eventually, it grew into something greater than friendship.

“Ms. Tammy has a certain way about her,” Emily said. “She told us before we were even dating that we were going to be together.”

Those mornings volunteering at Southern Crossing were so special to them that Anthony decided it was the perfect place to pop the question. However, when the bulk of the work at Southern Crossing advanced from volunteers to professional trade workers, their Saturday morning volunteer days had become less frequent.

But Anthony told Emily that LifeStyles needed them on this day. And they needed to recruit more volunteers, so they each called family and friends who agreed to help — even before Anthony followed up to let them in on the real purpose of the outing.

So their special moment happened in the place where their relationship grew stronger, and they were surrounded by the people they love.

Anthony and Emily married on August 1, 2020. Given the limitations caused by the pandemic, it turned out to be a small, intimate and beautiful wedding. Emily calls it a blessing.

The couple remain committed volunteers, and Emily has become a person whom Gausman or LifeStyles Executive Director Sandy Washington can contact directly whenever a need arises. Emily is a Realtor with the Jones Team at Exit Landmark Realty, and that group has long been a strong supporter of LifeStyles and its mission.

Emily says that it’s the people at LifeStyles who make the experience of serving so powerful.

“They make you feel like you’ve known them forever. As soon as you meet them, they really just welcome you into the LifeStyles family,” she said. “You can tell how genuine they are and they really love people no matter what. And that’s just infectious.”